“One of the earthiest and most distinctive voices not just in traditional circles, but anywhere.” – The Irish Times

Muireann Nic Amhlaoibh is a multi-award winning traditional singer and musician from Corca Dhuibhne, West Kerry. Muireann is a leading exponent of the sean nos style, and loves to engage with audiences to share her love of the Irish song tradition.

In addition, to her many years as a solo performer, Muireann has had over 13 years’ experience, as lead singer and flute player with Danú. Muireann would also be known to many for her presenting work with Raidió na Gaeltachta, notably for the shows: “An Braon Gaelach and “Malairt Poirt le Muireann.

Muireann, has an MA in Traditional Music and was awarded the prestigious Amhránaí na Bliana at TG4’s Gradam Ceoil in 2011.  Muireann’s latest critically acclaimed album “Róisin Reimagined” which was recorded with the Irish Chamber Orchestra.

Born into an Irish speaking family of illustrious musicians, Dónal, whose mother was the wonderful singer and flute player Eithne Ní Uallacháin and whose father is that great interpreter of South Ulster traditional music Gerry Ó Connor, has perhaps not surprisingly become an outstanding traditional musician.

However, this only tells part of the story of this gifted, versatile, multi-instrumentalist, who has carved out a unique path in traditional music, performance, recording and presentation. With 6 albums and scores of co-productions to his credit, from his base in Red Box Studios, Dónal has managed to combine his roles as live performer, recording artist and producer with that of TV presenter, gracing the screens of RTE and TG4 regularly.

Having performed with such diverse groups as Lá Lúgh, At First Light and Ulaidh, Dónal has been a frequent performer at a broad range of important folk festivals which have included:

Gerry Ó Beirne is a formidable singer-songwriter, producer and guitarist (6 and 12 string, tiple, ukulele or slide guitar), who hails from Ennis, County Clare. His debut solo album “Half Moon Bay”, contains songs that have been covered by some of Ireland’s greatest singers, including Frances Black, Maura O’Connell and indeed Muireann Nic Amhlaoibh.

Although now based in Dingle, County Kerry, much travelled Gerry has spent time in Ghana, California, Mexico and England. His latest album “Swimming The Horses”, is a stunning collection of original songs and guitar pieces.

Gerry has toured as both a solo artist and also with such well known bands and artists as Sharon Shannon Band, Patrick Street, Andy M. Stewart, Midnight Well, Andy Irvine, Kevin Burke and The Waterboys.

Formed back in 2015, Briste are an exciting trio consisting of Alison Crossey (Bodhran and Guitar), Emma Robinson (Flute and Tin Whistle) and Joanna Boyle (Banjo and Vocals). 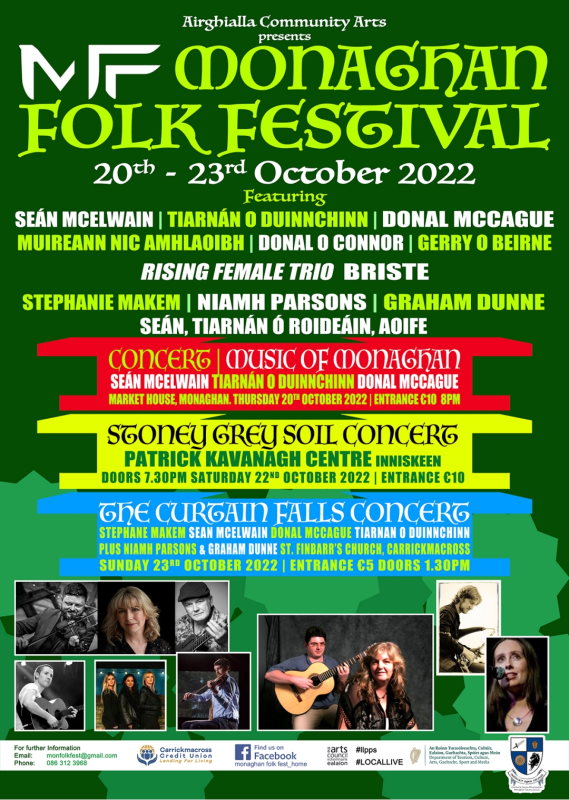